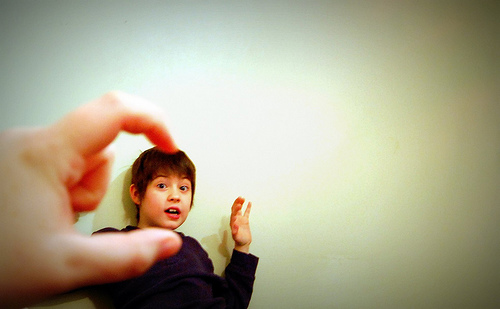 My name is Zeppel, I’m newly immigrated from Germany, and I’m eight years old. When I came through customs at the airport, I got separated from my family. I spent the night sleeping in the men’s washroom, but the next day I ran out of pocket money. I had only $10. 57 on me when we landed. I didn’t think I would be needing it for food the next day.

I wasn’t too worried at first about being lost in an airport. I like to explore strange new places, and I figured that my parents would return to the airport to look for me. But they didn’t, and I can’t explain why now. Anyway, I went to an airport security person and explained that I had no passport. My mom had it. And that they left without me!

That’s when all the trouble started for me! They took me into this small white room, stuck me up against the wall, and fired off some questions at me. Most of those questions I couldn’t understand, because I didn’t speak very good English yet. I tried to tell them that I spoke mostly German, but I guess they didn’t hear me or understand.

After that they told me to change my clothes. I said, “I don’t have any with me! It’s all in the suitcases my parents brought.”

I thought they were going to remove my head! They started looking for the luggage in the airport. I guess they thought it had also gotten lost, or maybe had something bad inside it, like a bomb! Maybe they thought I was a terrorist. I had heard all about how everyone thinks everyone else is a terrorist these days.

Since I was going to be stuck here in this room anyway, no matter what I said, I thought I would have some fun with these security guys. I told them s story that wasn’t true, even though it could have been. I just wanted them to find my parents! I told them that my parents were having a battle over me, and over which one of them should keep me. I guess that they believed me, because lots of parents live in separate places these days. I was actually hoping now that they would send me back home

to Germany. At least there, I had friends who knew me and did fun stuff with me. I could even live with my grandmother there, and go to my old school. So far this “new” place didn’t feel very good to me.

After three days sort of living in the airport security office, the police came and took me in their police cruiser. It was neat! They had all sorts of interesting gadgets on their uniforms, and even in their car. I got a ride downtown, to the police offices, where they had to fill in another report about me. They scary thing I overheard them saying was that if my parents didn’t come to get me soon, they were going to put me in an orphanage here. I didn’t want to be in an “orphanage”! I told them I wanted to go home to my own country.

“We can’t allow that,” a nice policewoman told me, ” because your parents would still be here.” “They still have legal custody rights over you because you are a minor”, I was told. That meant that they were going to keep me here, even though in my head, I thought I should be somewhere else. Do you know what that’s like? It’s like some giant hand that’s way bigger than you are is holding your head fast against the wall, and no matter how much you want to struggle against it, you know you can’t defeat it. It’s soooo much bigger than yourself.

Did that make any sense to you? I think they may put me in jail next, because, that’s probably what it will be like in the orphanage. A big fat JAIL with nowhere to go! I’m going to have to think of a way to escape from this big hand that’s controlling me. Let me see, there’s got to be a way!

This work is licensed under a Creative Commons
Attribution-NonCommercial-ShareAlike 2.5 Canada License .